Most brewers are probably aware that proper fermentation is necessary to produce high-quality beer, and that pitching healthy yeast, and enough of it, is what ensures a proper fermentation. What may be less clear, especially at the homebrew scale, is exactly how to maintain, pitch, and harvest healthy yeast. In most professional breweries, significant investments in time and equipment are put into yeast management; large breweries will generally have a dedicated yeast laboratory and full-time yeast management technician. While that kind of commitment is both unnecessary and impractical at the homebrew scale, establishing some basic yeast management procedures will pay dividends for any brewer.

Obtaining Yeast
It may be hard to believe that just a few decades ago, it was nearly impossible to obtain pure liquid brewers' yeast cultures. Thankfully, as modern brewers we have access to a wide variety of yeast strains of excellent purity. The commercial yeast labs do such a good job, in fact, that if you brew infrequently it may be preferable simply to purchase fresh cultures each time. The obvious drawback to this approach is cost; with two or more yeast products being needed for a typical homebrew batch, the price of yeast can easily exceed the remaining brewing supplies.

Yeast cultures for home brewers are generally packaged in either vials (White Labs) or soft-sided "smack packs" (Wyeast). In either case, the yeast is almost always of extremely high quality; the advantage of the "smack pack" technology is that it allows the brewer to visually verify that the culture is healthy before pitching. This is done by smacking the package a few days before brewing and verifying that it swells. Beyond that, pitching procedures are identical for either type of packaging: the outside of the package is sanitized, the package opened, and the yeast poured into the wort.

One unorthodox, but effective, technique for obtaining fresh yeast is to ask for it at a local brewery. By and large, after harvesting enough yeast for their next batch, breweries pour the remainder down the drain, in quantities far in excess of what a home brewer would need. Most brewers will be happy to set aside yeast for others provided it doesn't add much effort to their brew day. Obviously you should check with your friendly neighborhood brewer for specifics, but my preference is for home brewers to simply drop off a sanitized container labeled with their name, contact information, and desired strain (if the brewery uses more than one).

Yeast Pitching Rates
Beyond ensuring that the yeast is healthy, the most important consideration is pitching enough yeast. This requires measuring, or at least estimating, the number of yeast cells, wort volume, and wort gravity. The yeast pitching rate is then calculated as:

At packaging, the commercial yeast products contain roughly 100 billion cells. Age and poor storage conditions can reduce cell counts dramatically. So we can see that even a fairly typical homebrew batch will require at least two yeast packs or vials; a high-gravity lager could take nearly a dozen. For the most part, brewing with a new package of yeast will require some yeast propagation.

Propagating and Storing Yeast
At the homebrew scale, yeast propagations are commonly referred to as "starters". Propagations should be carried out in wort of low gravity, 8-10°P (1.032-1.040), with an abundance of nutrients and oxygen.

The extra oxygen they supply makes a stir plate or shaker well worth the investment, even for home brewers. Carried out under these conditions, a yeast starter will produce approximately 100 billion new cells per liter of starter wort, and so even a modest-sized starter can yield enough cells for a batch of homebrew. My preferred vessels for home propagations are one-gallon glass jugs, which are inexpensive and widely available.

For the most part, a starter will ferment to completion in 1-3 days, though this should be verified by checking its gravity. Once it has finished, it should be refrigerated for at least 24 hours to allow the yeast to settle out, after which the bulk of the liquid can be decanted off the top. Stored under low-alcohol beer at refrigerator temperatures, yeast can be kept nearly indefinitely, though its viability (the fraction of cells which are alive and healthy) will decline by about 25% per month, so additional propagation may be needed to ensure proper cell counts for pitching. At a certain point, a brewer may also decide that cell health or contamination concerns justify discarding the culture, though with proper technique these risks can be minimized. 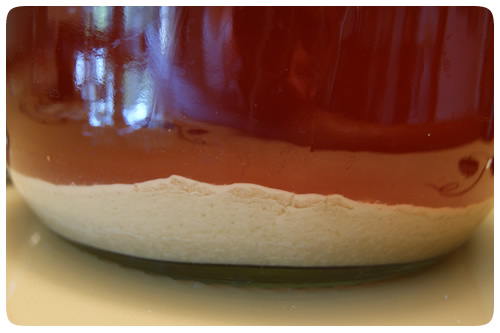 Yeast settles to the bottom of the propagation vessel during refrigeration

This propagation procedure also allows for a yeast "bank" to be maintained at home. A portion of a previous propagation can be set aside (pint-size canning jars are excellent for this) and used to prepare another starter weeks or months later. I've brewed with cultures over a year old using this method, though the major expense in time and wort for the propagations makes that impractical if new yeast can be obtained instead.

Harvesting Yeast
Provided some basic precautions are taken to maintain yeast health and sanitation, the slurry left in a fermenter can be an ideal source of yeast. During a typical beer fermentation, the yeast will double in number twice, and so several batches can be pitched from a single harvested slurry.

Moreover, the yeast will be of proven quality, having just successfully fermented the previous beer. In order to harvest the healthiest yeast possible, the beer should be of low gravity and hop content. If yeast must be harvested from a hoppy beer, the slurry can be washed using either chlorine dioxide or an acid, but this is generally not necessary.

At the commercial scale, most fermentations are done in cylindroconical tanks, and one reason is that yeast can be easily harvested from the bottom of the cone. Since most home brewers don't have conicals, it's worth putting some thought into how yeast will be harvested. Bucket fermenters make it simple to collect slurry; all that is needed is a scoop or ladle able to reach the bottom. 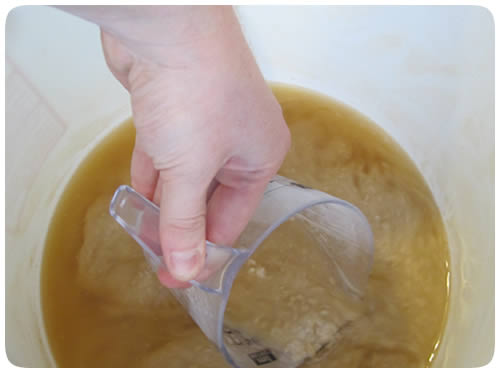 Harvesting yeast from a bucket fermenter with a sanitized glass measuring cup.

Any tools which touch the yeast must be thoroughly sanitized, however. When harvesting from a carboy, the yeast can simply be poured out, though the lip of the carboy should be sanitized first, and of course care should always be taken when handling glass.

Counting Yeast
Ideally, before pitching yeast into a batch of wort, a brewer would count the number of cells and pitch correct quantity. With experience, this is not a difficult procedure, and requires only a microscope, plate cytometer (a visual cell counting chamber), and optionally a staining agent that can check for viability. For very serious home brewers and any commercial brewery, this equipment is well worth owning, and a full cell count should be done regularly. For the occasional home brewer, however, a less precise counting technique may be sufficient.

One method that can be used very successfully to estimate cell counts is serial dilution. A suspension of yeast cells in water will be visibly cloudy as long as the cell density is above 1 million/milliliter. Knowing this, a brewer can dilute a slurry with water until it appears clear; the dilution ratio (which should be on the order of 1000:1) then gives the cell density in millions of cells per milliliter. In practice, many dilutions need to be done in order to "bracket" the cell count, but once this has been accomplished the results can be every bit as precise as a microscopic count.

Finally, if no other method is available, a very approximate cell count can be determined by measuring the mass or volume of yeast slurry. Freshly harvested slurry will generally contain 1-2 billion cells per gram (or milliliter). After several days of cold storage, the cells will settle out and compact to 3-4 billion per gram.

After several cell counts have been done for a particular strain, it may be possible to eyeball cell densities with acceptable accuracy, but occasional counts should still be done to ensure continued good results.

Conclusion
Proper yeast management is essential in brewing, but it does require some attention on the part of the brewer, and should never be taken for granted. Fortunately, using the basic equipment and techniques outlined here, home brewers can put their yeast to work making the best beer possible.

Related Yeast Articles:
Basic Homebrew Yeast Lab - Capturing, culturing and testing yeast in your home brewery.
Yeast and Fermentation - Strains of yeast and the fermentation process.
How to Make a Yeast Starter - Step by step instructions with pictures.