by Homebrewing.com Staff
The art of batch mixing big beers in high places

You wouldn't expect to find a used Japanese brewhouse, purchased from a Russian theme park, up in the high mountains of Cali pumping out some of the best imperial stouts and barleywines your tongue has ever played touchies with, but that is exactly what you will find at Fifty Fifty Brewing. 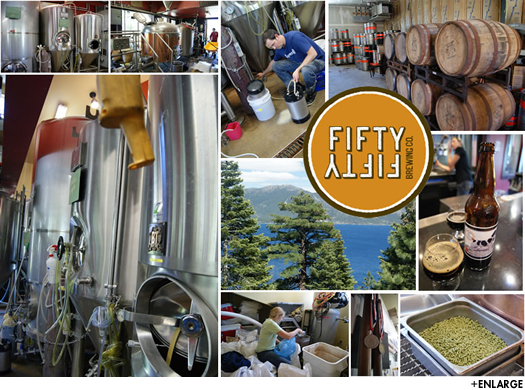 I was excited to brew a batch and meet Todd Ashman who is considered homebrewing royalty and a pro brewing legend. Most recognized for his barrel program at Flossmoor Station in Chicago, Todd loves crafting new beers and is respected in the industry for his layering of malt flavor and use of exotic ingredients like raisins, local honey and imported sugars. I was bummed to find out he wasn't there that day, but I got the next best thing. The Fifty Fifty brew crew.

Brewer, Gene Curtin, along with assistant brewer Alyssa "Shook" (That's all I ever heard anyone call her) invited me to the brewery for the day to brew a batch of stout, talk about homebrew, the brewery history and some of the new things they're trying out. All I can say is that these two were some of the nicest I have met in any brewhouse I've been to and they seem to really enjoy their jobs. Well no shit right? 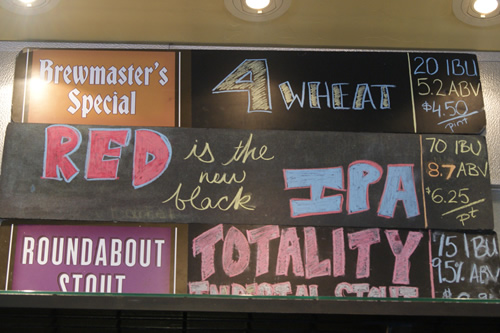 As if being able to live and brew professionally in the gorgeous mountains of Truckee, CA isn't enough, you have quick access to North and South Lake Tahoe for winter and summer play. Access to craft beer in these parts is also ridiculous. Well, ridiculous to a Texan that can't usually get any limited edition CA beers past the state line. Russian River, Ballast Point and Firestone brews are everywhere. Even in the gas stations? Really, that's not fair.

Good beer and homebrew seems to be plentiful in the area too. Gene told me that he had homebrewed two years before he decided to start brewing professionally. He still homebrews and says, "Most of the preparation for the Fifty Fifty sour beers is usually done in a homebrew style." "If you're into homebrewing check out the North Tahoe Brew Crew club for homebrew activity in the Greater Tahoe Area." 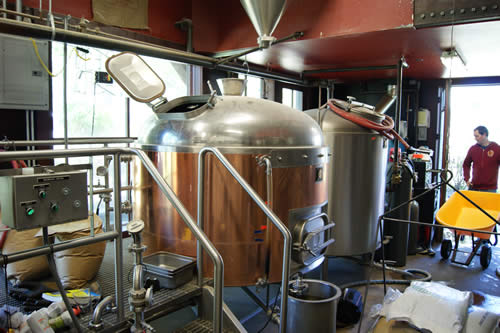 Brewer, Gene Curtin, hauling in grain for the brew day.

The Fifty Fifty Brewing name leaves a lot open for interpretation, but I think the name refers mostly to the passion the brewers have for creating one of a kind blended craft brews. The stout we brewed included honey, palm sugars, 2-row, pale malt, an assortment of hops and a special yeast prepared just for Fifty Fifty by Wyeast. After the brew day was done, I sat at the bar to taste some beers they were working on at the time. Some very tropical flavors emerged from the barleywines like pineapple, coconut and spice, which shows great control of the fermentation. 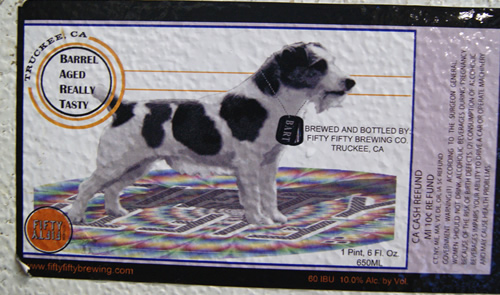 I sampled a fantastic beer that really showed off their barrel blending skills called B.A.R.T. which was an homage to Todd's brother Kyle who had a mutt that lived for 22 years.

A Little Blending Background
Blending beer is a technique that has been used, for the most part, to salvage beers that have flavors that have gone slightly awry. However, these days, some blended beers are being produced by craft and micro-breweries as a delicacy. This is a far cry from how blending of beers has been utilized in the past.

The historical practice of blending beers is one that might have originated with unscrupulous town barkeeps or brewers attempting to utilize ales that had soured or aged badly. Some see this practice as the origin of what I would call beer cocktails - like the Black and Tan (1 part light ale, 1 part dry stout), Snakebite (1 part ale, 1 part cider, or Guinness and blackcurrant. Blending beer is a technique that can be used ethically or unethically, depending on the situations surrounding its use.

The ethical use of blending beer can be justified when the beers in question have been made using proper sanitation techniques, but have off flavors for reasons other than contamination or the brewer wants to combine two types of beer to create a whole new style. For example, experiments with recipes, admixtures or ratios of ingredients may produce combinations of flavors that are not well balanced. In such a case, it is possible for the brewer to create a new batch of beer that will balance out the flavor of the first batch in a way that is satisfactory. It is also possible that a flavor in an initial batch of beer is overpowering in such a way that it needs be diluted.

New Brews
Some craft breweries are using blending beers to produce new styles of double-beer, such as Southern Tier Brewing Company and Fifty Fifty. Southern Tier has dabbled in blending beers with their "Gemini" - an unfiltered Imperial Extra Pale Ale that is blended with an Imperial IPA. This limited edition seasonal mid-winter beer has received numerous accolades. 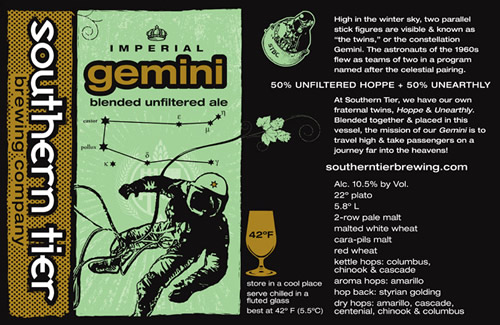 Unethical use of the blending beer technique is to use it to dilute a beer that has gone bad. When beer has gone bad through microbial contamination, there is nothing to do but throw it out. It cannot be saved, but it can ruin other beer if the two are blended together. Beware the temptation to blend beer in this case - the result will not be good.

I have personally had experience with fermentations that I felt could be saved… and those I felt could not be saved. Consider aging the beer before blending it. In many cases, an off flavor or a flavor that is overpowering, can be cured by simply utilizing patience. This is especially true in the case of musky flavors, as the following anecdote is indicative of:

Once, I brewed a batch of Morning Glory Mead that contained morning glory flowers. The flowers were dry hopped into the mead, meaning that the flowers were placed fresh into the carboy as the mead was being pitched with yeast. I initially intended to leave the flowers in the carboy for two weeks, and then rack the mead, thereby removing the flowers from the fermentation.

Unfortunately, and due to reasons beyond my control, I was unable to attend the mead for a significant amount of time. By the time two months had gone by, the interaction of the flowers, sugars, alcohol, and yeast had produced a severe, musky flavor. The brew had not been contaminated, but the musky floral bouquet was overpowering. Because mead takes a long time to ferment out in any case, I decided to let it finish and see what happened.

The fermentation went for a year, and the flavor, while still musky, had subsided significantly. So, I bottled the morning glory mead, and after aging another six months, the taste was perfect. The mead tasted so good that it had been drunk before another two months had passed.

With beer, the aging vector is a little shorter, starting at one month and extending to six months at the longest. With most beers (not barley wines), the flavors tend to dissipate after six weeks to two months. So, if the flavors have not mellowed by two months, it might be a good idea to consider the option of blending the beer with a new batch that could balance whatever extreme flavor had harshened the first batch.

I would suggest a beer with strong hop character, to ensure that there will be a preservative quality to the final blended beer. If the quality that needs to be balanced is an extreme bitterness, then the boil should be done without hops, and the hops should be instead dry-hopped to provide a floral bouquet to mask that bitterness, along with a rich malt character - maybe even a raw ale.

For beers that have lost hop character, you may be able to dry-hop directly into the aged beer to give it new life. A nice bunch of low acidity hops thrown into such a beer can add a rich, floral bouquet within a matter of days.

Some would say that the innkeepers of old would dry hop souring or off-kilter ales with wormwood (Lord Wormcastles's Select Bitters) to mask the undesirable flavors. This would probably also add an extra inebriation effect from the wormwood, one of the main ingredients in Absinthe. Although using wormwood that was not distilled would certainly be toxic to the ale, the extreme bitterness of the herb could make almost any soured ale drinkable.

Blending the Old and the New
One example of traditional beer blending comes to us from the Lambic tradition of Belgium - it is called the Gueuze. The Gueuze is made by blending two batches of Lambic together - a young batch (one year old) and an old batch (two to three year old).

Another successful example blended beer is Schmaltz Brewing Company's "Vertical Jewbilation Ale". This ale blends ale made with the same recipe, but from different years. 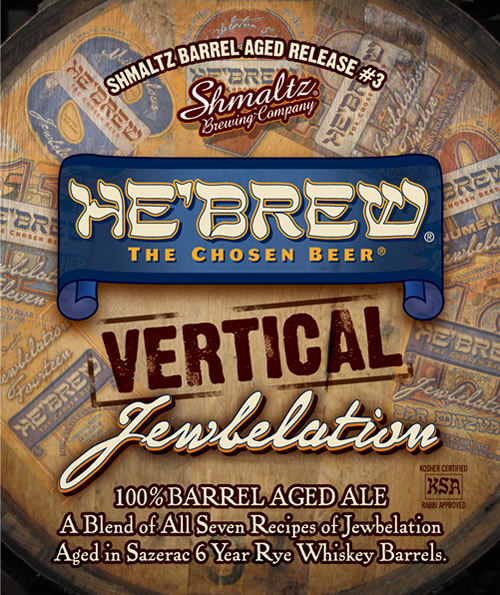 To top it off, the ales have been aged in Rye Whiskey barrels! This is a blend of seven batches of ale which range from eight to 14 years with an almost mind-numbing array of flavors surging through the arc of the sip or swallow. This is a fine example of beer blending in its most ethical and as a mark of beer craftsmanship.

Related Articles:
Barrel Tips from the Pros - Insights for using barrels on a homebrew level.
Basic Homebrew Lab - White Labs shows you how to set up a basic homebrew yeast lab.