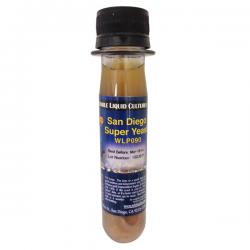 San Diego Super yeast from White Labs is another very versatile strain. it is often compared to their California Ale strain of yeast, with higher alcohol tolerance, higher attenuation, higher flocculation and quicker fermentation. Used in the production of many American style beers, it finds a special place in the production of IPAs, imperial and double IPAs, and barleywines. That is not to say that it cannot be used on lower gravity beers; indeed, it can create dry, easy-drinking beers from lower gravity worts which come out crisp and delicious. Very clean and neutral, it leaves a good balance between malt and hops. For this reason, it is a favorite of brewers wishing to make a range of well-balanced beers. 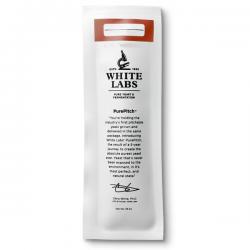 Now available in PurePitch Packaging! White Labs' California Ale yeast is their version of the most popular American Ale strain in use in the home breweries of America today, and is a popular choice for almost any beer your brewing imagination can come up with. Mostly used in the production of American pale ales and IPAs, this strain can also be used in almost any style, from blonde and cream ales to porters and stouts, and is a good, neutral strain to use when making fruit beers as well. A clean profile and quick, complete fermentations are both characteristics that make this yeast stand out as a star in the brewing world. Try this yeast when making beers where a cleanliness that allows both hops and malt to come out is desired.

About White Labs PurePitch
PurePitch Packaging utilizes a White Labs patent pending FLEXCELL process, which allows the yeast to be propagated and packaged in the exact same material, which means the yeast is never exposed to the environment! Click here for more info on the PurePitch advantages.

Now available in PurePitch Packaging! White Labs' English Ale yeast strain comes from a large independent brewery in England, and is a perfect choice for making brilliantly clear English and British style beers of all kinds. It is widely used in the production of English bitters, but does well in almost any English or British style beer, from including porters, milds, browns and stouts. It creates a woody, earthy English flavor and aroma profile, while leaving a bit of residual sweetness that influences perception of malt character. A very good choice as a house strain, it is commonly used as such, even in breweries where one wouldn't expect an English strain to be featured as a house yeast. Try this yeast next time you are brewing up something English.

About White Labs PurePitch
PurePitch Packaging utilizes a White Labs patent pending FLEXCELL process, which allows the yeast to be propagated and packaged in the exact same material, which means the yeast is never exposed to the environment! Click here for more info on the PurePitch advantages. 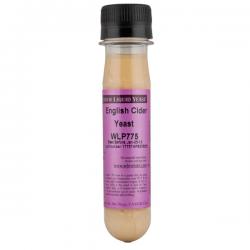 The WLP775 strain from White Labs, is a classic cider yeast. It ferments dry, but retains natural flavor from the apples. Sulfur will be produced during fermentation, but will disappear in first two weeks of aging. Can also be used for wine and high gravity beers.