With all of this new revenue coming in, and an ever increasing demand for specific yeast and hop flavors, the worlds of microbiological science and horticulture have been able to respond and provide brewers with more tools and materials they need to envision bold new brews and flavors.

I spoke with Jim Solberg, CEO of Indie Hops in Portland, OR who is experimenting with many new breeds of hops and he says, "Right now our new experimental breeds are limited to evaluation from regional craft breweries only, and not at the point where we can open them up to a broader audience." "Just not enough hop material to do that until we narrow down selections and propagate more plants," Solberg says.

Earlier this year Indie Hop released a new hop called Meridian. "We released a small amount into the market from the 2011 crop, and have a larger amount entering the market from this year's crop," he said. "It carries a complex "tropical fruit/mixed berry/sweet lemon aroma/flavor", is very "clean" and versatile," he added.

The new Meridian hop was developed while trying to revitalize an old hop from the past called Columbia. The group is excited that the new breed of hop was discovered, but still is not giving up on their quest to bring back Columbia. "We’re excited over here, about excited as anyone should be allowed to get over the discovery of a “sexy” new hop plant," Solberg stated in press release earlier this year. "At the same time, on a somber note, we’re mindful that poor Columbia, as mighty and strong and beautiful as we know she is, will have to wait another few years for her big night in the spotlight."

Another new breed is the HBC342 hop. HBC 342 is a high alpha aroma variety bred by The Hop Breeding Company. It has been selected for its high alpha and pleasant aroma combined with its late maturity towards the end of September to early October. Some say the hop aroma is mild, pleasant, citrusy and has hints of watermelon.

Hop Union is going bigger with their Green Hops program. In 2012, brewers will be able to select from 6 different hop varieties (Amarillo®, Cascade, Centennial, Chinook, Citra® and Simcoe®.

There are hundreds of strains of hops and yeasts currently available for home and commercial brewing. With all of these, and more being developed every day, the array of potential flavors and combinations is starting to become dizzying. 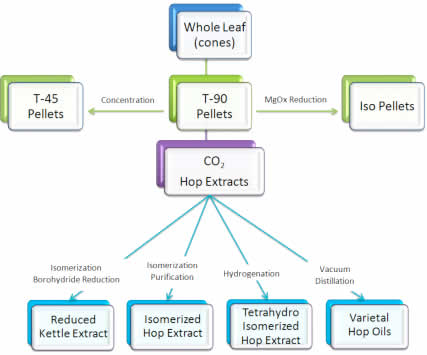 As a home brewer, it is best to understand the different qualities and characteristics which these vagarious strains and products exhibit in order to understand how to use them to the most desired effect.

Know Your Hops
Likewise, hop farming has, in recent years, become more and more important for the production of the vast quantities of commercially produced craft quality beer that are made today. The realm of hops production and flavor possibilities also has its own set of scientific terms to describe the character of the hops and how that character can affect the palate. You should familiarize yourself with the following terms in order to effectively peruse a catalogue of different hop strains:

Alpha Acids, Beta Acids, Co-Humulone, Lupulin, Myrcene, Humulene, Caryophyllene, Farnecene, are all technical terms for the various aspects of the chemical ingredients that make up hop flavor, but one must also consider the total of oils and the pedigree of the hops strain to fully understand it.

This may all seem like a lot, but with the right hop provider, the salesman can guide you through this array of terms to what will work best for you.

Research for Hardier Hops
Many University agricultural programs are conducting research to bring hop production to more and vagarious growing locations, including the University of Minnesota. U of M horticultural science prof. Vince Fritz, and Charlie Rohwer , his associate in research, are two people who are giving the matter of hop production a lot of thought.

These fellows oversee a quarter acre worth of hops production of in Minnesota, where they are experimenting with different trellis designs and other factors in growing with the aim of being able to grow more hops locally on Minnesotan farms. Their research may one day make local hops production far easier for a region that prides itself on local union made brews. In an ailing economy, beer consumption, and therefore beer production, does not seems to be in any kind of slump or decline.

Ancient Brewers Inspire
Ever since brewers from the ancient past began to realize that there were certain techniques that could be used to activate the spirit of the beer they were making, brewers have been honing the craft of yeast selection and production. With the great expansion of the craft brewing market in the last 20 years, more and more attention has been payed to how to propagate and culture specific yeast strains for the best resultant brew.

Where ancient brewers used to shout at their wort to wake it up, or use a magic (yeast containing) wooden spoon to bring life to beer, now we have microbiologists working around the clock to develop specific combinations of yeast and yeast nutrient to effect the most delicious and efficient fermentation process possible.

White Labs, is planning to experiment with yeast strains for help in crafting Indigenous Beers, which they will pour in their tasting room. The experiments will help the lab better advise brewers creating styles with unusual yeast or fermentation practices. Another avenue of experimentation for White Labs in 2012 will be to find the best strains for use with beers that are not made with hops, as those beers present special challenges when it comes to combating spoilage.

Wyeast is company that is reaping great rewards for their investment in the scientific study of yeast strains and their propagation, as well as delivery methods convenient for home brewers and commercial brewers alike. With differing yeast packs available for brewing beer, wine, mead, cider, and even for distilling purposes, this is one company that shows just how far yeast production has come in recent times.

According to the Alfred Jørgensen Laboratory, another commercial yeast lab, yeast is often described in the following terms:

‘Flocculence, Reproduction, Rate of Attenuation, Extent of Attenuation, Aromatic Quality (e.g. level of esters and other aromatic compounds, and Cleanness (absence of diacetyl and sulphur compounds).’

Understanding these terms is vital in communicating with your yeast provider to be able to choose the strain that will be right for your brewing project. This is part of the process of brewers being able to understand what yeast is, and how it works, which has been going on for thousands of years.

More New Trends in Hop and Yeast Harvesting and Production for 2013
Rogue Brewery, based in Newport, Oregon, has discovered that their brew master’s beard contained a yeast perfect for brewing and intend to make a commercial craft beer fermented with the master brewer’s beard yeast.

According to a June press release, available on the Rogue Brewery web site, the brewers sent in some clippings from the brew masters 20-something year old beard for analysis at the White Yeast Lab, and the lab discovered a new kind of yeast that is perfect for brewing, and did not match the yeast that is standard for Rogue brews. The new beer is to be called “New Crustacean”, and should be available in early 2013 – ask for it at your local craft beer store! This naturally opens a whole new field of potential for harvesting new yeast strains, accessible by home brewers and commercial brewers alike.

One very interesting development in hops experimentation comes from New York City, where Sixpoints Brewery is continuing a publicly attended “Controlled Experiment” with the subject of Hop flavors. The Sixpoints brewery is making a beer on a monthly basis, using the same recipe every time – except changing one variable each month – the hops. This experiment is called the “Spice of Life Series”.

According to the Sixpoints Brewery’s web site, the 2012-2013 roster of experimental hopping looks like this: