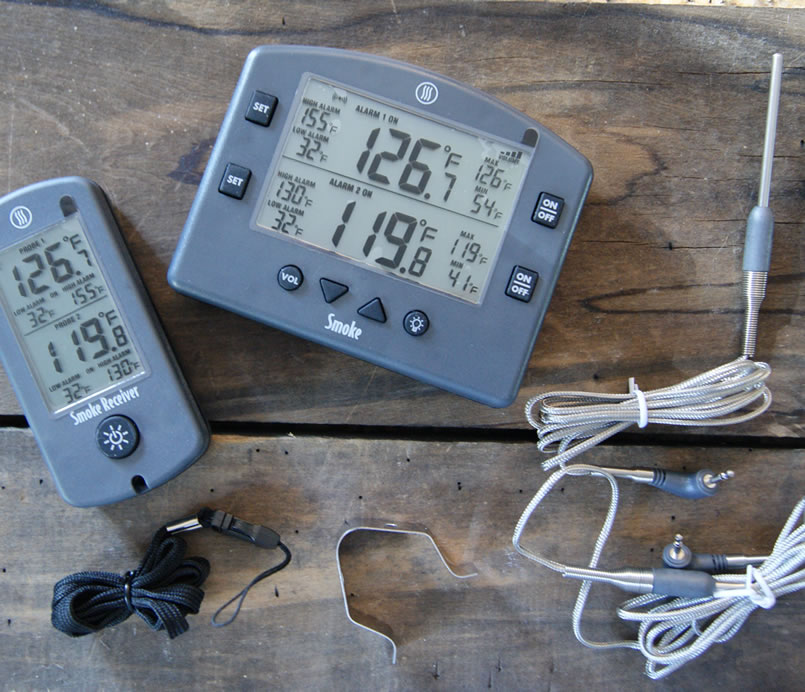 The folks at Thermoworks sent over their newest gadget called Smoke for us to use during brew sessions to see how it can assist home brewers. This wireless thermometer/multiple probe alarm will alert you on high and low set points. Perfect for monitoring temperatures while mashing grains, boiling, fermenting and dispensing. Smoke can be used as a traditional thermometer to get quick temperature readings of grain, strike water, sparge water, chilled wort and even yeast starter temps.

A high temp air probe and high temp cooking probe are included. There is an optional waterproof liquid probe (Model #TX-1002X-NP) that would be best used in the home brewing environment when taking liquid temperature readings.

We used the Thermoworks Smoke on brew day and were impressed with how fast the readings registered compared to some other quick read thermometers we've used in the past.

Smoke is a very high quality dual-alarm wireless temperature monitor that was definitely designed with professionals in mind. Not only is this unit useful when smoking and baking, it is a great tool to have in the brewhouse. Paired with the immersible liquid temperature probe, smoke can monitor and alert you when temperatures reach a desired high or low in many places during a brew session.

I used the Thermoworks Smoke unit in almost the entire brewing process. Some places I used the unit were strictly for testing purposes and not very practical. The most useful spot for using SMOKE in the brewing process was during the mash. The unit alerted me on the wireless receiver when the mash temp dropped below my desired set point and then again when the temperature rose above my desired set point when I added additional heat.

Here's what I got with the Thermoworks Smoke Here's what I did with the Thermoworks Smoke

I used SMOKE to monitor the temperature of the yeast starter on a stir plate. I smoked a few pie pumpkins and other gourds for use in a smoked pumpkin saison recipe. SMOKE worked as promised to monitor the temperature in the smoking chamber and also the internal temperature of the pumpkins.

I used SMOKE to monitor the temperature while baking/sanitizing equipment in the oven/stove. Temperatures are crucial when sanitizing hard to clean homebrew parts. Some stainless steel parts can be steamed/baked for sterilization and SMOKE helped make sure the required temperatures where actually reached inside the parts.

I used SMOKE to grab the current grain temperature. I used SMOKE to monitor the (HLT) strike water temperature. I used SMOKE to monitor the step mash temperatures. I used SMOKE to monitor the boil temperature. I was able to set high and low alarm points on the unit to make sure the boil didn't drop below my desired boil temperature and also not get too high and cause a boil-over.

I used SMOKE to alert when beer (wort) was chilled to the desired temperature. I used the liquid probe directly in the boil kettle while chilling with a copper coil wort chiller. I also used the liquid probe inline on a counterflow setup to monitor the wort temperature as it fell to 68 F. I simply pierced the silicone tube with the probe and it made a perfect seal with no leaks. The wort ran over the probe spear and took readings with no problem. Slipped the liquid probe down inside the fermenter lid and pushed in a silicone bung and airlock to make an air-tight seal while fermenting in my brew bucket.

I used SMOKE to monitor internal liquid temperature in kegerator. The magnetic backing of the smoke transmitter works perfect to stick to the exterior of most kegerator doors. I dropped the liquid probe down into a glass of water to get the true liquid temperature inside the kegerator.

If the Thermoworks Smoke won't sync you can follow these steps to re-sync the unit.

Smoke / Smoke Receiver Sync Instructions
Thermoworks says that the Smoke and Smoke Receiver come paired out of the box so you should only need to re-sync when replacing or adding receivers, but my unit did not connect when I first powered it on. Here are the instructions for pairing the units together if you are having issues.

• At this time Smoke and Smoke Receiver are now paired.

NOTE: To sync multiple Smoke Receivers to one base, please follow the steps above on one Receiver at a time. Putting Smoke into Sync mode will not disable or interfere with previously synced receivers.

My Exprience with Thermoworks Support

The first Smoke unit I received would not pair with the receiver, so the Thermoworks team had another unit shipped out immediately.

The support team also sent out a liquid probe to use in the different parts of the homebrew process. I highly suggest you get this waterproof liquid probe (Model #TX-1002X-NP). It can handle full immersion temperatures of up to 392°F, perfect for boiling, mashing and fermenting. The Thermoworks Smoke has so many different uses. I can use this for homebrewing, meat smoking, kegerator temperature display, sous vide cooking and much more. After using the unit for a month I can say that it is by far the most durable and fastest reading remote dual temperature monitor on the market. The new wifi gateway for Smoke will be coming out in 2017 and will allow smartphone monitoring too, so this is truly a must have for any brewer's tool box. 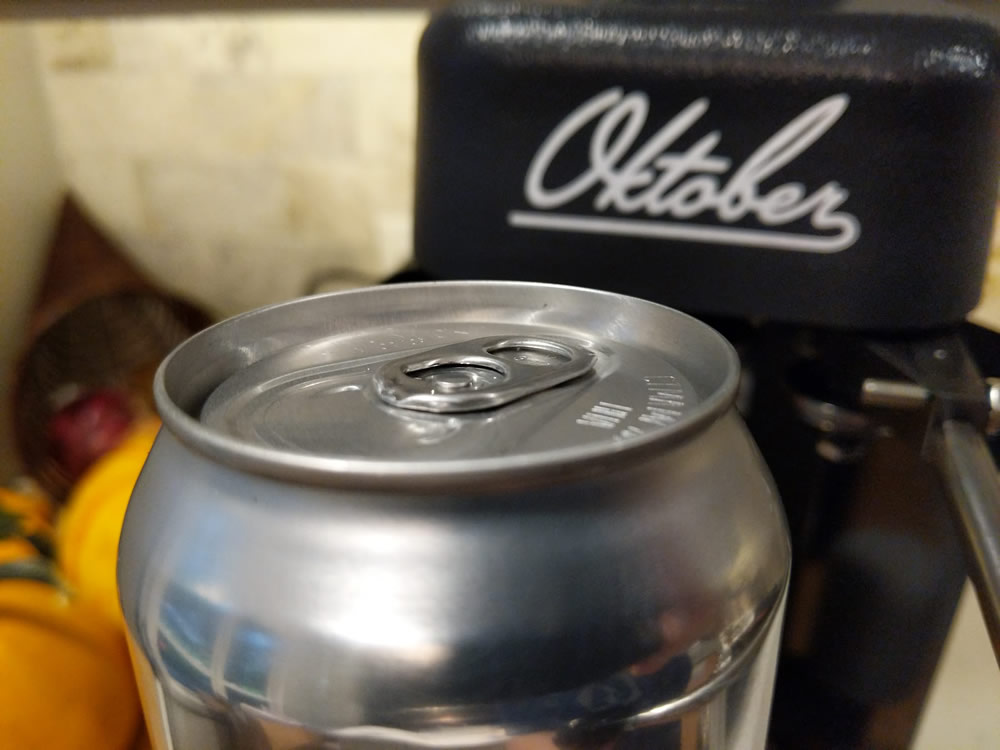 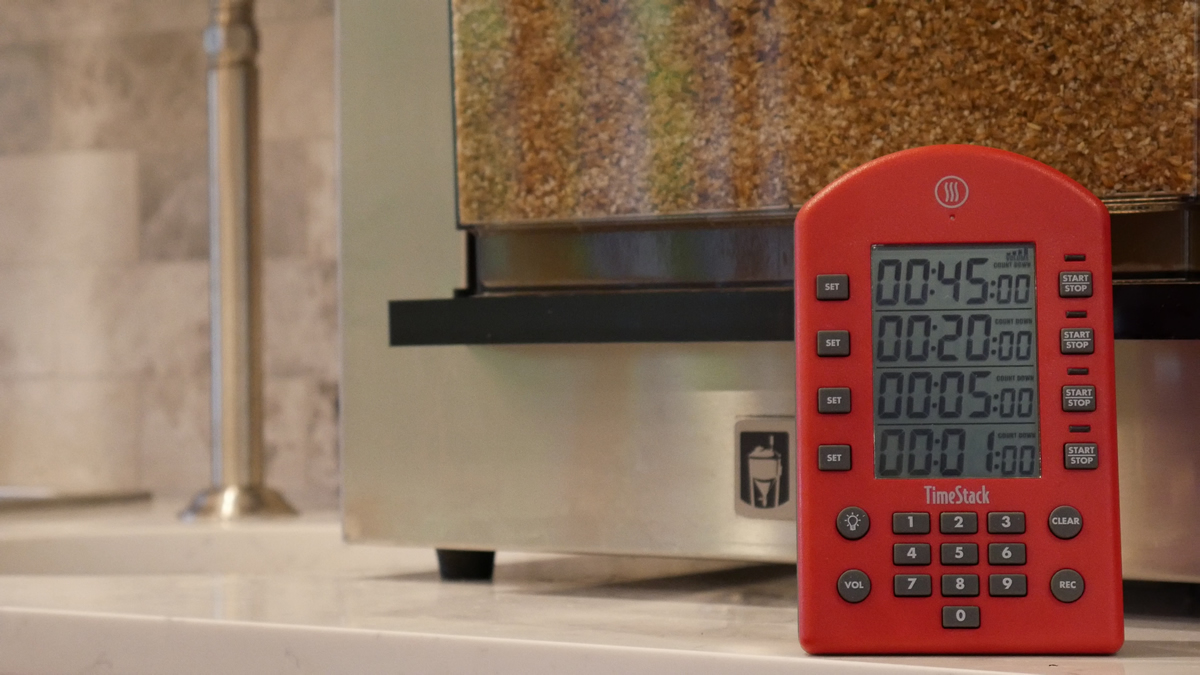 How the Thermoworks TimeStack Stacks Up 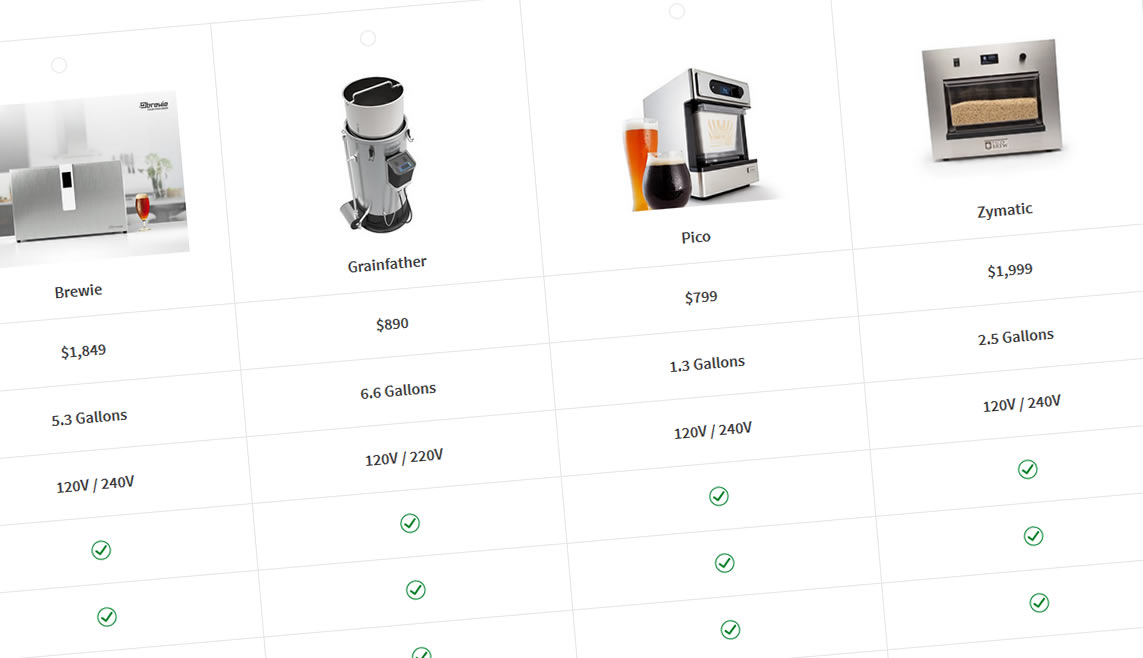