Conditioning your beer with alcohol - why do it, what to choose, how much to put in, what are the results? Read my experiences with upping the ante and making regular homebrew pretty amazing. 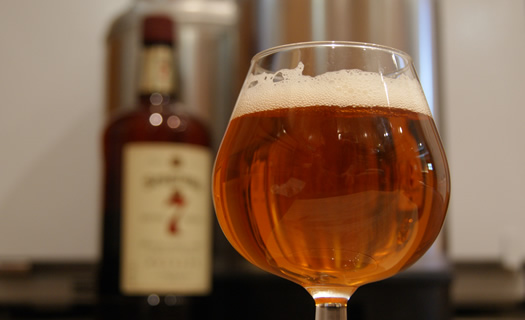 A few years ago, I tried making a pumpkin beer. Not a huge fan of pumpkin pie to begin with, I began to think of ways that I could make the recipe pop, without just tasting like thick spiced squash. I ended up using 100% canned pumpkin, throwing in some allspice, and crossing my fingers.

The grain bill was pretty basic. Using pumpkin towards the end would ensure that the flavor wouldn't get lost in the boil. The wort was tasty, but it was missing a flavor component. Realizing that the only thing I really enjoy about a slice of pumpkin pie is the whipped cream, I knew that I had to incorporate that flavor somehow. After a week and a half of fermentation, I transferred the ten gallon batch into a conditioning keg and did something that other homebrewers thought was a bit crazy: I added a fifth of whipped cream vodka.

Several friends were a bit confused and even turned up their nose at the idea. Why would I add liquor to a perfectly good beer? Not knowing if the added volume would water down my Smashed Pumpkin Ale or completely enhance it, I waited another week to taste. The result? Subtle sweetness on the back that enhanced the earthy squash tones in the front. The addition of vodka makes this one of my harvest favorites.

See the recipe below. 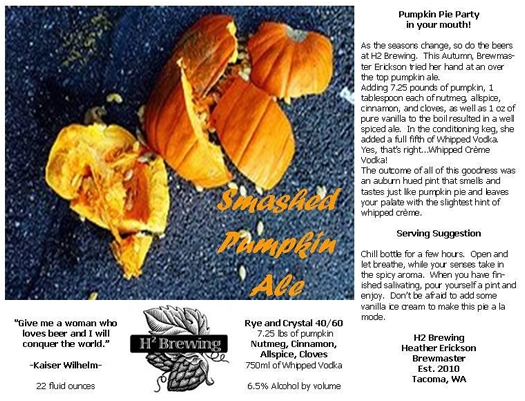 With the success of using vodka, I began to think of other brews that I could enhance with the addition of alcohol, without ruining the intended flavor profile. Finding out recently that my own mother has been making her own kahlua, for over twenty years in fact, I knew I needed to put that in one of my creations. My first edition of Witch's Brew Espresso Stout included a 48oz cold brewed addition of Starbucks Espresso Roast coffee. The process of cold pressing, filtering, and adding the coffee was quite labor intensive. While astringent and strong was what I was going for (I drink five shots of espresso every morning), others didn't necessarily enjoy the harshness of this ale.

The second time I brewed this recipe, I relied on the grains to give me that coffee flavor: carafa, black barley, and chocolate malt. The wort was still coffee-like in flavor, but I wanted something to smooth it out. After fermentation was complete, I put in 32oz of Mom's Homemade Kahlua and let it sit for a few weeks. The result was, once again, a smooth and sweet back end. The kahlua, made with a brandy base, allowed the sharp grains to mellow out, yet still carry their taste all throughout the palette. A few "rebrews" of this stout has had me adding more and more kahlua each time. So far, I have found that using 64 ounces in a ten gallon batch is the key.

See the recipe below. 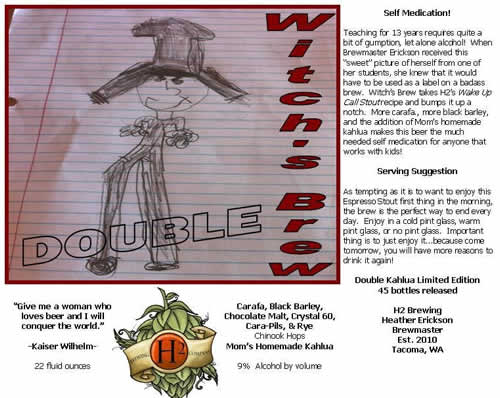 Another trend I have seen other home brewers use incorporates the use of oak chips in order to get that barrel aged flavor. They end up soaking a number of oak chips in a container of Jack Daniels and letting them sit while their porter ferments. Once fermentation is complete, they either dump the entire mixture in their beer, or strain out the booze and just put the wood chips in. Either way, this results in a bourbon barrel aged beer without having to use a barrel at all. Depending on the girth of your ale to begin with, you might want to hold off on dumping the rest of the liquor in with the chips. As is everything with homebrew, first experiment and then adjust to your taste.

A general rule of thumb that you want to use when adding alcohol to condition your ale is that you want to enhance the flavor you already created in the wort. You don't want the liquor to overpower and become the main focus of your brew. So far, I have only conditioned beers that had enough maltiness to stand on their own. In choosing the alcohol, be cautious to only use flavors that will enhance the flavors you already have going on. Staying away from citrusy vodkas in stouts and whisky flavors in pales means that you won't have competition in your final creation.