American Barleywine is an old American ale that descended from strong "October" style beers brewed on country estates. The flavor has loads of complex malt backed up by an American mix of hops. The aroma gives you a huge hit of spicy American hops and rich fruity malt. The balance of this style can be malty or hoppy depending on the homebrewer's preference. American barleywine is brewed year round and is best in winter. They are great with very intense foods, but better with dessert. (Try it with a strong American Blue Cheese or Double Gloucester cheese with chives and green onions.)

American barleywines usually have a higher alcohol content than their traditional counterpart. Similar to an Imperial IPA, but the malt is more forward than hops adding to a rich body. It also contains a lot more hops than English barleywines. The normal gravity range for an American barleywine is 1.085 -1.120+ with an ABV range of 8-12%. The hop character is very evident on this beer, but does not have to be unbalanced and can range anywhere from 50-120 IBUs with color 10-20L and attenuation medium to full.

This is a beer I make in February and age until December or as long as I can resist the urge to tap the keg. I highly suggest you try this recipe if you are a fan of big hoppy beers. Happy Homebrewing! 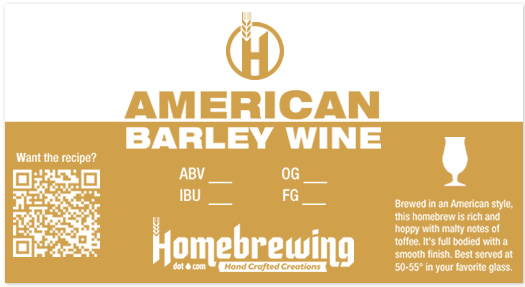 We as Americans may sometimes go overboard when it comes to things we are passionate about, but the American interpretation of the richest and strongest of the English ales will never be questioned. The results, although similar to its English counterpart, are nonetheless outstanding. With our American homebrew psyche we strive for bigger attenuations, bigger hop aromas, bigger hop flavors and this style does not disappoint. The American barleywine style delivers all that and then some with proper aging, so fire up your kettles and brew a batch.